Red wasps are a species known for their bright red color. They are native to the southern United States and live from New York to Florida, stretching west to Arkansas and Texas.

They are a type of “paper wasp” and build their nests out of chewed wood pulp and plant fibers. Which they make into an actual paper material. This gives the lightweight nests a paper-like appearance and texture.

How to identify a red wasp

Red wasps are easy to identify due to their bright rusty-red bodies and all-black wings. They stand out in the wasp world as the only “all red” wasp. They’re also easily distinguishable from other wasp species due to the style of nests they build.

How can you tell you’re looking at a red wasp nest? If it looks like an upside-down umbrella, and it’s attached to a surface with a long, thin strand of paper material, chances are it’s a wasp nest.

Where do red wasps like to build their nests?

Red wasps typically build their nests in protected areas, such as under the eaves of a building or in a tree. They don’t mind nesting in dark areas. This makes small cracks in roof overhangs, tiny dark spaces in sheds, and the underside of grills favorite locations for red wasps to establish their homes.

They will also build their nests near sources of food, such as garbage cans or compost piles. Red wasps have some of the largest nests in the wasp world. How many red wasps can live in a nest? The largest known nests contain up to 5,000 individuals.

What do red wasps eat?

Red wasps are herbivores. They love to eat caterpillars, sweet nectars, and any other sugars they can find. They may love your recycling bin; it’s a place humans often deposit bottles and cans containing sugary leftovers, and it’s an easy place for wasps to move in and out of. They feed the gathered sugars and insect proteins to larvae in the nest.

Red wasps are important to the environment because they help to control the populations of other insects, so killing these wasps matters (especially if you like to garden).

They shouldn’t be removed if they pose no threat or are found in areas away from human activity. However, if many of them live in close proximity to you, your pets, or your family, it’s time to get rid of them.

Yes! They are known for their aggressive behavior and will quickly sting humans when their nests are disturbed. Unlike bees, they don’t die when they sting, so they can sting people multiple times if they sense a threat to their home.

What does this mean for you?  Be cautious around these wasps, and develop a plan to manage them if you see them on your property.

Red wasp control and your property

If you find red wasps on your property, what should you do? The first step is to try to determine where they are nesting. Once you find the location, if you feel it’s too close to you, you’ll want to have the nest removed from the area as soon as possible.

Keep in mind that red wasps are aggressive when disturbed. If the nest is large, if you have an allergy, or if you are unsure if you are allergic, do not attempt to remove the nest yourself. However, if it is a small nest and allergies are not a concern to you or anyone in your vicinity, timing is important.

Red wasps are most docile at night and are least likely to sting you then. If you plan to remove or spray the nest, do it after dark. You can purchase cans of “wasp freeze” at a local home improvement store. If you’re uncomfortable dealing with wasps, or if the problem is unmanageable, get a professional exterminator to inspect and remove the wasp nest.

Finding these rusty-red-bodied wasps might be a bit frightening. They’re helpful critters if they aren’t bothering you, but if they’re a threat, they need to be removed.

Call the pest control professionals at 855Bugs today to schedule a FREE inspection. 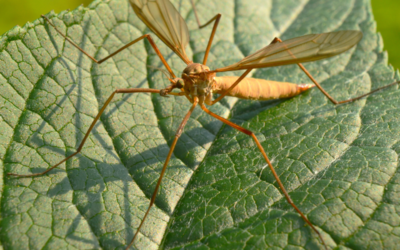 The Myths of the Mosquito Hawk The mosquito hawk is a large, flying insect commonly mistaken for a mosquito. Despite its name, the mosquito hawk is actually a crane fly. It's probably gotten a bad rap because it looks like a giant version of its distant cousin. There... Flying Insects in Central Texas—Lovebugs, Mosquitoes, Wasps, and Bees Folks around Waco and Temple are used to dealing with flying insects. Our area is home to lovebugs, mosquitoes, wasps, bees, and many other flying pests. While some can pose a danger to residents,...