The 4 Key Things to Know

Many different types of spiders live in Texas. The brown recluse and the wolf spider are two more commonly known species often confused one for the other.

While these two spiders may look similar at first glance, they have some key differences, including the threat they pose to humans.

Here are four things to know about brown recluses vs. wolf spiders:

Brown recluses are brown, while wolf spiders can be brown, black, or gray. The brown recluse is smaller and has six eyes. The wolf spider has eight eyes and is considerably larger.

Brown recluses are shy and will often flee when disturbed, hence the name, “recluse.” Wolf spiders are more aggressive and will attack if provoked. They hunt and pounce like wolves. Brown recluses are more likely to live near humans, which means more chances of getting bitten.

The brown recluse is more venomous than the wolf spider. A brown recluse bite can cause severe health problems in humans, including necrosis (tissue death). If you believe you have been bit by a brown recluse, it’s important to seek medical attention immediately.

Signs it might be a brown recluse that bit you include a brown or blackish mark on your skin with a raised, red area around it.

The wolf spider’s venom is not as harmful to humans but can still cause swelling, redness, and pain. If a wolf spider bites you, you may experience redness, swelling, and itching at the site of the bite. However, these symptoms should subside within a few days.

A wolf spider bite could cause a more serious reaction if you are allergic to insect venom.

Brown recluses are typically found in dark, sheltered areas like garages, closets, and attics. They like to hide in clothing or shoes and can be brought into homes on these items.

Wolf spiders, on the other hand, prefer to live outdoors. They are often found in wooded areas or near streams and ponds. Wolf spiders are found worldwide, whereas the brown recluse is generally found only in the southern and midwestern US. 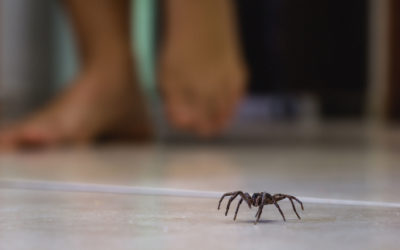 What are the most dangerous spiders in Texas? The four species (not two!) you need to watch out for—       The Most Dangerous Spider in Texas: Black Widow       The Copycat: Brown Widow AKA Grey Widow       The Runner-Up: Brown Recluse AKA Fiddle Back AKA Violin... It’s been said that you’re never more than a few feet away from a spider – and that’s especially true in Texas. It’s hard to go too long without running into one. Everyone should have a basic understanding of the types of spiders you’ll find in Texas. As well as how...